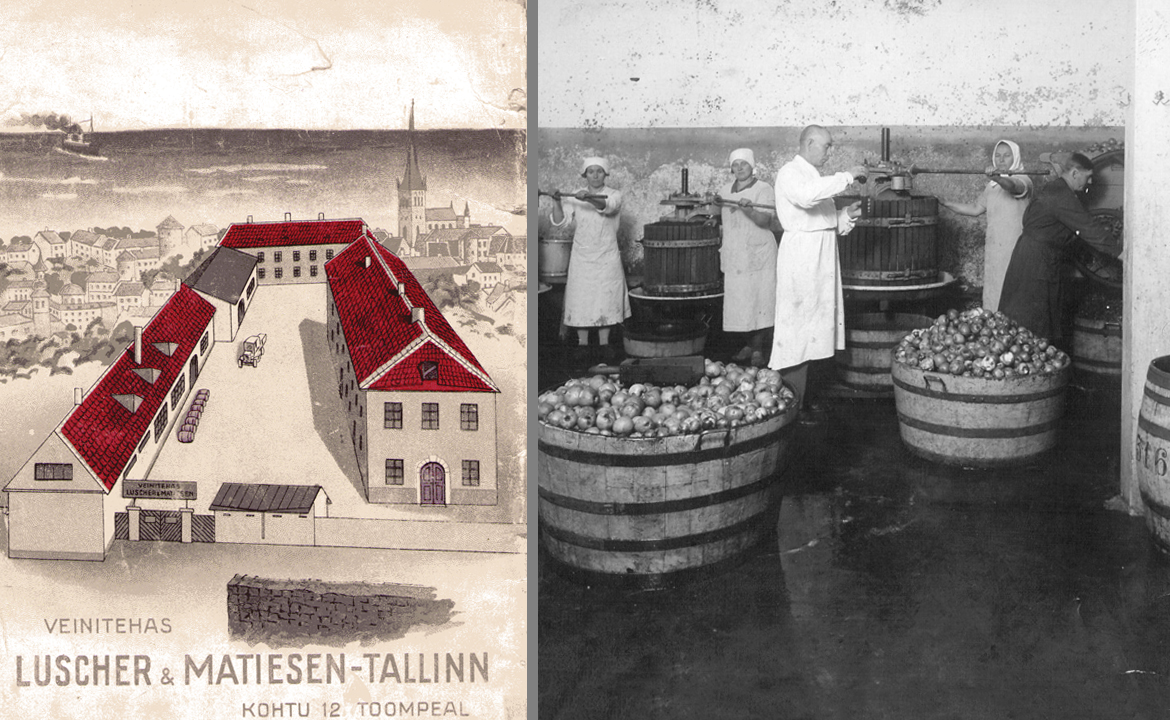 100 YEARS OF STORIES AND LEGENDS

History has lots of surprises to offer. Who would have thought that Estonia – a northern country with cold climate – was actually already in the 1930s a progressive wine country. A place were local wine culture was created and developed, and rich tastes were offered to even the most demanding customers. It is surprising to many that one of Estonian biggest wineries was situated in Toompea and has a great significance in promoting local drinking culture.

This is a story about Lüscher and Matiesen – iconic merchants, whose lead has inspired us today, almost a century later to wake up the brand of Luscher & Matiesen and introduce it to You.

The roots of Luscher & Matiesen brand go back to 1910, when Swiss-born Arnold Lüscher and an estonian Paul Matiesen established a vodka factory in Moscow. During the tragic events of the October Revolution the gentlemen had to cease their business and leave the country. Destiny lead them to Tallinn, home town of Matiesen, where in 1921 the business was given a new start. Luscher & Matiesen imported several world-famous beverages to Estonia, for example Barton & Guestier wines, Gordon’s Gin, Johnnie Walker whiskey and Edmund Dupuy cognac. Additionaly they manufactured a vermouth product line in Toompea, under the licence of Martini & Rossi.

In 1929 one of Estonian biggest wineries was established in the Tiesenhausen building on the slope of Toompea, where under the Matiesen brand several wines and other alcoholic beverages were produced and bottled. Some years later more than 18 000 pails of wine were fermenting in the wine cellars of Toompea, that is more than 200 000 litres. The yearly total production of the winery reached up to 400 000 litres.

In order to enrich the product line in 1930s, young Dimitri Matiesen, Paul Matiesen’s nephew was sent to study in Germany under Baumann, the local leading apple juice manufacturer. As pioneers in Estonia, Luscher & Matiesen started producing fresh unfermented apple juice from local product in Toompea, gaining vast recognition all around Europe. The business blossomed – in addition to importing and manufacturing they ran a popular wine bar and shop in Tallinn on Kuninga street. The home-made and imported beverages became popular all over Estonia. In 1940 due to hectic times in the country, the business had to close its doors again. Arnold Lüscher managed to flee to Switzerland, his home country. Paul Matiesen on the other hand took the second loss of his company so devastatingly that he was not able to make peace with destiny anymore and left us tragically before the deportation by the Russian army. The last director and partner of the company, Dimitri Matiesen, was able to flee to Sweden on a ship.

Luscher & Matiesen was re-established in 2009 after Dimitri Matiesen made a last visit to Tallinn to celebrate his 100th birthday. Today the Matiesen wines are back for your enjoyment. We bring you a selection of wines from European best areas. By starting with France and Spain, we plan to travel further and further in the exciting world of wines. You are welcome to join us in this thrilling journey into the depths of wine culture.